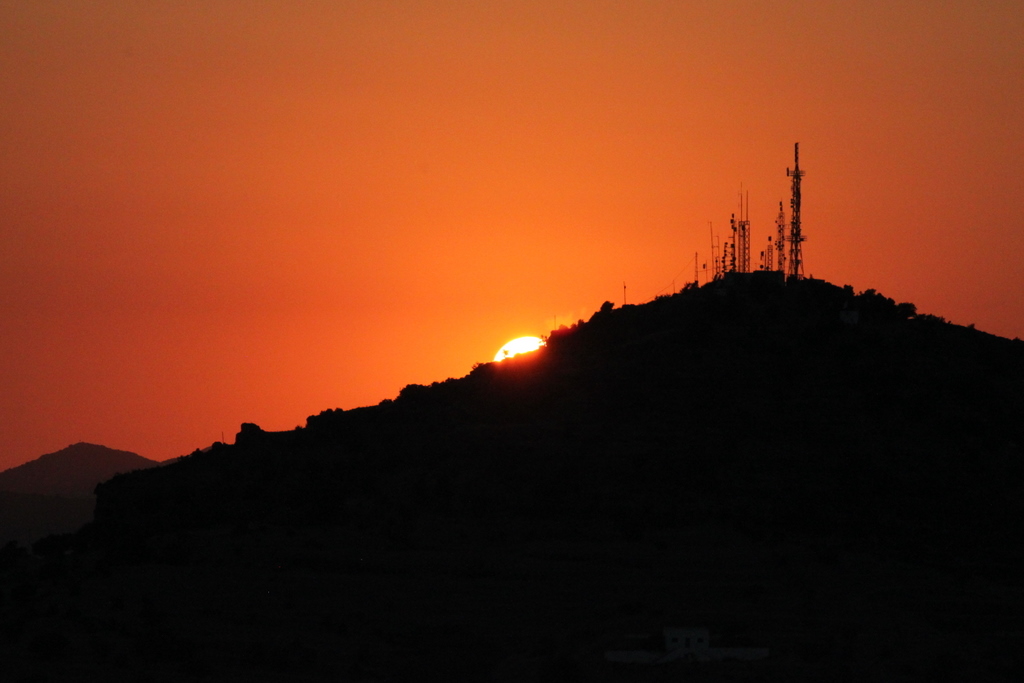 After what seemed like a long day of traveling, we arrived in Bodrum Friday evening. We had a very nice dinner sitting on an outside terrace overlooking the harbor, the Aegean Sea and Bodrum. I have a picture of the sunset behind one of the hills. The sky turned orange and red.

Just after sunset, the lights on St. Peter’s castle were turned on.

After meeting our guide this morning, we set out to see some of the sights in and around Bodrum.

Our first stop was an ancient amphitheater built into the side of a hill. This setting has been used since the 4th or 5th century B.C. and is still being used today for musical performances and plays. A large part of the amphitheater is still useable and we walked up and down to see the views of the Aegean Sea and the town of Bodrum. The stone seats were pretty comfortable since they had been smoothed out over the past 2500 years.

We then visited a family tomb that was used for more than 500 years. We were led to the tomb by our guide, who was pretty pleased with himself since the tomb was in a modern grocery store [!!!] and he did not tell us why we had stopped there. [Big surprise for you inside!]

Then we went to see the Myndos Gate, which is part of the restoration of the walls that once protected Bodrum. This gate was oriented towards a town called Myndos. How long has the gate been here? Well, it was old when Alexander the Great came through it when he captured the city in 334 B.C. Much of the gate and the walls still need to be restored, but it was impressive as it was. The scale is pretty large, but here is a picture.

You might think that is the gate, but it is really a trick. You would come charging through there only to find a much smaller gate in front of you. Then the rock-throwers and archers would pop up from the walls while you and your pals were trying to get through the much smaller and better defended real gate. All that is left of that gate is the place where the doors would have dropped down.

From there we went to see some old “windmills” which might be better written as wind-mills since they were used to grind grain with the help of the wind. When you look at the picture below, think of the story of Don Quixote fighting a windmill and it will make more sense since these are more on the scale of a man on horseback. (I can’t remember if he was actually on a donkey.)

We went on to St. Peter’s Castle. This was built in the 15th century. In addition to being very interesting in its own right—the guide was bursting with information about it—it now houses an underwater museum that showcases some spectacular underwater shipwreck finds. No, the museum itself is not underwater. One exhibit has 2 or 3 hundred amphora containers ranging in age from ancient Egypt to fairly modern times. Other exhibits show some of the smaller things recovered from some of the wrecks. There is a great view from the top of the castle. There is no way I can tell you about everything we saw. You will just have to wait until we select from the nearly 400 pictures we took today.

A short trip on the Vltava